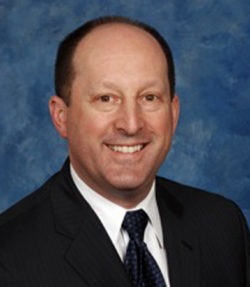 Dr. Libutti, MD, FACS, was named as the new Director of Rutgers Cancer Institute of New Jersey in late 2016 and serves as Vice Chancellor for Cancer Programs for Rutgers Biomedical and Health Sciences at Rutgers University. His aim is to further propel scientific discovery, as well as augment and expand comprehensive cancer services for patients through collaborative efforts with Rutgers and RWJ Barnabas Health.

A graduate of Harvard College, Dr. Libutti received his MD from Columbia University. He has been a tenured Senior Investigator and Chief of the Tumor Angiogenesis Section in the Surgery Branch of the National Cancer Institute (NCI).

Dr. Libutti has authored more than 270 peer reviewed journal articles, holds seven U.S. patents, and serves as Editor-in-Chief of Cancer Gene Therapy. He is the recipient of both NCI and NIH Director’s Awards and has been recognized as a top doctor and top oncologist by Castle Connelly. He has also been recognized as one of the best doctors in New York by New York Magazine.

Your ticket for the: Steven Libutti, MD